The first month of the musical year marked the event that combined major and minor notes. 100 years ago was born composer Arno Babadjanyan, person whose works enriched repertoire of many famous soviet singers – Muslim Magomayev, Sofia Rotaru, Maya Kristalinskaya, Lyudmila Zykina, Edita Piekha, Valentina Tolkunova and others. Sadness deals with the fact that talented musician isn’t with us punctuated with a happiness that we can take pleasure in listening his musical works that are immortal. 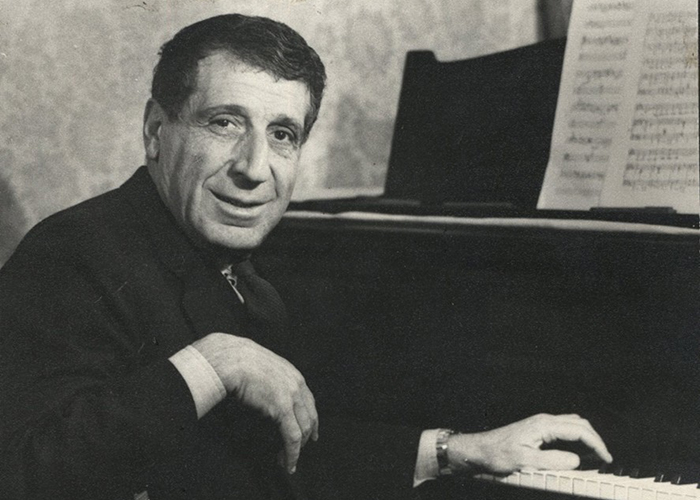 In January 23 the «First channel» showed the documental film «Both the sky was not enough and the earth… » coincided with the composer’s anniversary. Such famous artists as the vice-president of the Authors’ Council of the Russian Authors’ Society (RAO), musician, composer, producer, artist, photographer, theatre and cinema producer Stas Namin and the Presidium member of the Confederation of rightholders societies of Europe and Asia (CRSEA), composer Ervand Erznkyan took part on the set of this film.

In our article you can read memories of Arno Babadjanyan’s admirers for whom the song «My Yerevan» is a hymns for the Motherland and art.

For example, the General Director of the public organization for collective management of copyright and related rights «Armauthor» (organization – CRSEA member) Sysanna Nersisyan who personally knew Arno Babadjanyan and now remembers him with great warm and respect:

«Arno Babadjanyan is very famous – his works people known, loved and played not only earlier but also nowadays. Speaking about his works we means both popular and classical music – «Nokturn» written by Babadjanyan surprised by its warm-heartedness and beauty».

As remembers Sysanna Nersisyan, composer commented his glory in such a way:

«Every rissole in all restaurants on the territory of all cities of the Soviet Union is mine». And he was right because his works played practically in all cafes and restaurants.

No less enthusiastic review about his great fellow-countryman said Presidium member of the Confederation of rightholders societies of Europe and Asia (CRSEA), People`s Artist of the Republic of Armenia, President of the author society «Armauthor», composer Ervand Erznkyan.

Arno Babadjanyan is fairly called the son of its country who kept love and reverential attitude to the culture of Armenia during his life. Modern Armenia also honors and remembers its gifted people. For example, the Ministry of Education, Science, Culture and Sport of the Republic of Armenia on the anniversary of the composer formed commission, one of its members became Ervand Erznkyan.

As he said, the year 2021 will be the year of Arno Babadjanyan. During this year is planned to organize different events: concerts, meetings in the honor of Arno Arutynovich but everything may be possible only if the epidemiologic situation will be positive.

«It is planned that the Pop-Symphony Orchestra of the Public Television and Radio of Armenia (Ervand Erznkyan is an artistic director of this orchestra) will organize independent events that are not connected with general program. For example, in April is planned to organize musical concert with the participation of students and tutors of pop and jazz Department of the Yerevan state conservatory with the help of radio and television of Armenia.

We selected program and place of this event – one of the best buildings in Yerevan – Aram Khachaturian Concert Hall. As for the other events, I am sure we will have a lot of them. Also if we can invite singers from Russia it will be wonderful» – he added.

Respect and remembrance of the famous composer found its expression not only in music but also in monumental art. In the center of Yerevan, near the Armenian National Academic Theatre of Opera and Ballet named after Alexander Spendiaryan was established a monument to Arno Babadjanyan.

History of the monument is not simple – for a long tome not everybody could accepted and understood the image of the composer that was created by David Bedjanyan.

«Very talented and young sculptor David Bedjanyan who passed away very early was the friend of Arno Babadjanyan. David Bedjanyan decided to create a tombstone for Arno Babadjanyan but many people including friends of the composer disliked this monument. May be the reason was a delayed action of thinking or a courage of creation.

Later the best place for the monument was found – near the Theatre of Opera and Ballet – where it looks very seamlessly from any angle. Nowadays this monument is the best one in Yerevan» – said CRSEA Presidium member, People`s Artist of the Republic of Armenia, President of the author society «Armauthor», composer Ervand Erznkyan.

Sculpture, songs broadcasting and playing classical works of Arno Babadjanyan is a homage of his creativity. On the opinion of Ervand Erznkyan, musicians always loved Arno Babadjanyan for his musical productivity, energy that helped to record all works with great love and made music more meaningful and deep.